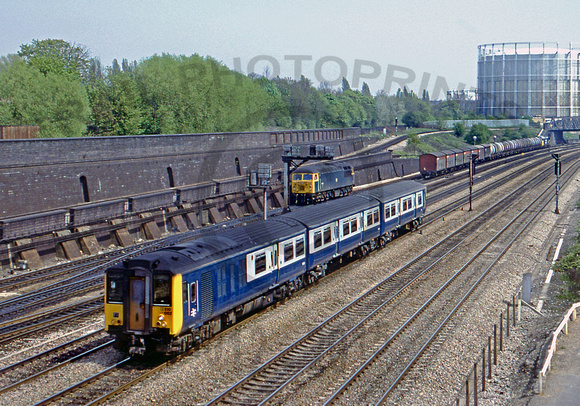 During the early '80's BR Engineering designed and constructed 2 Class 210 DEMU's (one 3 coach. one 4 coach), these sets were tested throughout the UK, after initial testing the 2 sets were based in the London Area with the 4 car set 210001 being pased at Reading and used primarily on services from Paddington to Reading, Newbury and Oxford, the 3 coach set 210002 was based at Southall and primarily used on Paddington - Slough services. After due consideration it was the 'Sprinter' Class 150 which was chosen to be the basis for BR's 2nd Generation of DMU.
On 29/4/84 210002 has just passed under old Oak Common Flyover as it heads west with a Paddington - Slough local service. ©Dave Moulden/Rail Photoprints
©Dave Moulden/Rail Photoprints
Powered by ZENFOLIO User Agreement
Cancel
Continue