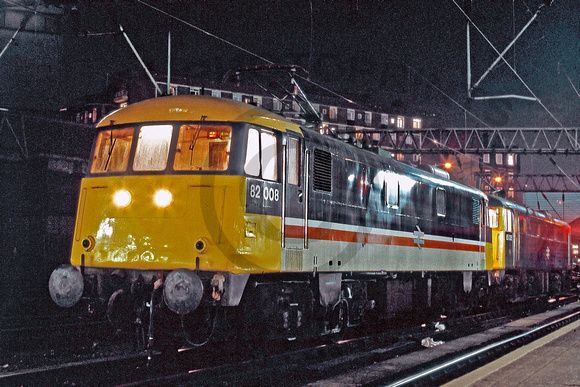 82008 stabled in the company of 85035 at London Euston on 21st March 1986. Between 1982 and 1987 two members of the Class 82 fleet (82005 aND 82008) were retained for empty stock movements between Wembley carriage sidings and Euston, being allocated to Willesden depot. The body condition of 82008 became so poor that eventually it was repainted in mainline livery and this transaprency was taken shortly after the repaint. Under the original AC orders a fleet of 10 Type 'A' (passenger) locos was ordered from AEI/ Metropolitan-Vickers, who sub contracted mechanical construction to Beyer Peacock of Gorton, Manchester. Under the AC loco classification system this fleet became AL2 and allocated numbers in the range E3046-E3055. Under BR TOPS numbering the fleet became Class 82, numbered 82001-82008. The first loco of the build emerged in May 1960, and took up trial running on the Styal line near Manchester.
The external appearance of this fleet followed the design of the other AL1-AL5 fleets, but the construction method was significantly different, incorporating a separate underframe and body. At the design stage it was envisaged that weight might be something of a problem, and to overcome this much alloy and glass fibre was used. The between cab layout was almost identical to the AL1, and the cab layout conformed to the BTC standard style adopted for all the AC builds of the 1960s. Two pantographs were fitted from new, as was vacuum train brake equipment. During the early 1970s, when air braking was being introduced, the entire fleet was refurbished to provide dual brake equipment, at the same time the redundant 6.25kV pantograph was removed and the space filled by the additional air braking reservoirs.
When built, one side of the loco had six grilles, while the other had two windows and two grilles. After refurbishing in the early 1970s the grille side was altered to incorporate an additional vent panel to improve internal ventilation. After introduction the AL2 fleet wa
Â©Gordon Edgar/Railphotoprints.co.uk
Powered by ZENFOLIO User Agreement
Cancel
Continue