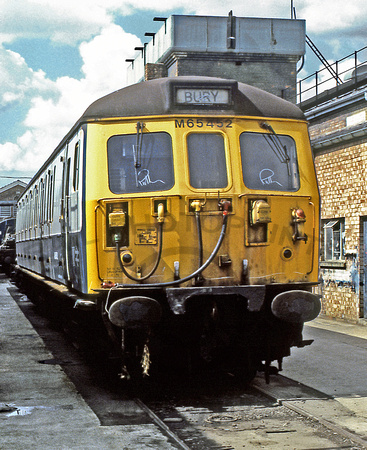 The BR Class 504 was a unique type of electric multiple unit that ran on 1200 V DC third rail with side-contact current collection. All other UK third rail has the electric "shoe" on top of the rail. The type was used only between Manchester and Bury. They were built in 1959, and the body was a standard type used for several electrification schemes of the time, but the high DC voltage through a side-contact third rail was unique in Britain. The units replaced the previous 5-car units built by the Lancashire & Yorkshire Railway for the route, which had inaugurated this electrification scheme in 1916. Prior to its closure, most heavy overhaul works of the units were carried out at Horwich Works, but following its closure heavy maintenance work was carried out at Wolverton, where they were originally built. The units overhauled at Wolverton at this time would return to Bury freshly repainted into the then-new GMPTE orange and tan livery. All units of this type were withdrawn in 1991 when the line was closed for conversion to form part of the Manchester Metrolink light rail system.
©Gordon Edgar/Railphotoprints.co.uk
Powered by ZENFOLIO User Agreement
Cancel
Continue