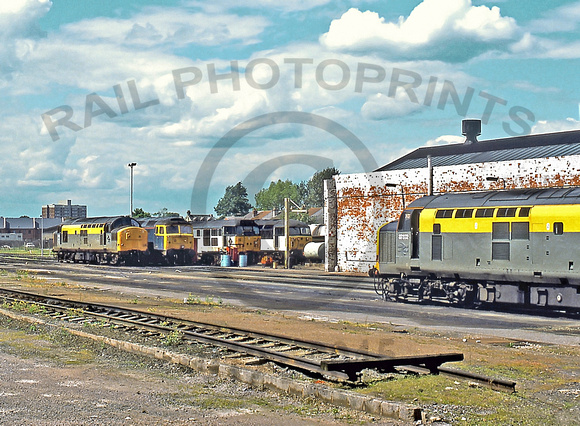 The steam depot here (shedcode 85B) used to boast an allocation of over 100 steam locos in its heyday. It closed to steam in January 1966, but was converted for diesel traction, a fuel point installed and the work bays converted. It ceased to be a maintanence depot in December 1990 but was a signing on point and stabling point for diesel traction for few more months until staff were moved to South Wales and loco repairs being undertaken at other depots.

The site continued to be used for equipment storage and on- track plant and for a short time as a stabling point for Cotswold Rail until that went into administration, however most of the site has been derelict since 1993. The main steam locomotive running shed is in the foreground and where the class 37 locomotives are standing.
©Gordon Edgar/Railphotoprints.co.uk
Powered by ZENFOLIO User Agreement
Cancel
Continue