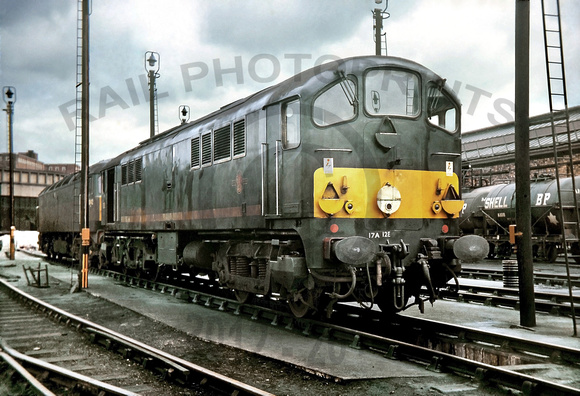 D5709 at Carlisle Upperby in July 1966. The old Derby shedcode is still visible on the front, alongside its more recent Barrow-in-Furness (12E) shed allocation. It is seen in the company of a grubby Brush Type 4 D1842, which was little over one year old at this time, being delivered new to Crewe North (5A) shed in May 1965. Under the TOPs scheme it was renumbered 47192 and survives today in preservation at the Railway Age, Crewe. The class 28 was introduced into service in January 1959, but did not fair as well, being withdrawn in December 1967 and scrapped at J. McWilliam's scrapyard at Shettleston, Glasgow, in October 1968.

The roundhouse is located behind the class 47, with the engineman's lodgings (surviving as the Swallow Hilltop Hotel today) on the hill behind. The shed to the right, used for DMU and carriage stabling, survives to this day, but in a derelict state. The sidings here are now used by DB Schenker for surplus/condemned wagon storage, although also overgrown. Photographer Charlie Cross - ©Gordon Edgar Collection/www.railphotoprints.co.uke
Â©Gordon Edgar CollectionCollection/www.railphotoprints.co.uk
Powered by ZENFOLIO User Agreement
Cancel
Continue