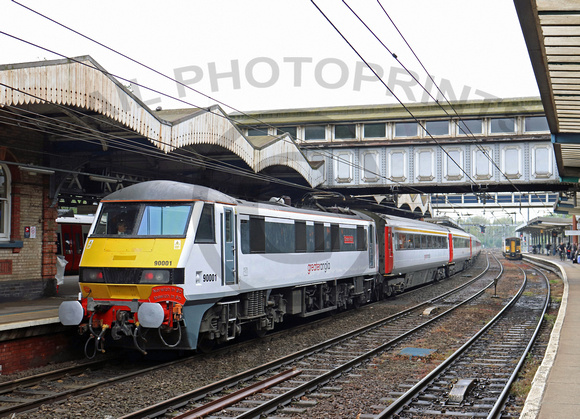 The commencement of the new timetable saw Greater Anglia implement an improved 'high speed' service between Norwich and London Liverpool Street, the first train of the service was 9P91 the 09.00 Norwich - Liverpool Street headed by Class 90 90001 'Crown Point'. The service returned as 9P90 the 11.00 Liverpool Street - Norwich service seen at Ipswich. The loco still carried the headboard reading 'Norwich in 90, Ipswich in 60' a message which spoke for itself, in reality the train completed the journey in 88 minutes proving that such acceleration of service was possible, although examination of the timetable reveals that the speed improvement was largely as a result of dropping 6 station stops (those at Diss, Stowmarket, Manningtree, Colchester, Chelmsford and Stratford(set down)). One assumes that the revised schedule was designed to enhance the reputation of the new 745 'Flirt' sets which will shortly commence service but it must be recognised that the older Class 90 power was capable of achieving the 90 minute schedule all it took was the cessation of certain operational stops, 20/5/19.
©John Day/Rail Photoprints
©John Day/Rail Photoprints
Powered by ZENFOLIO User Agreement
Cancel
Continue