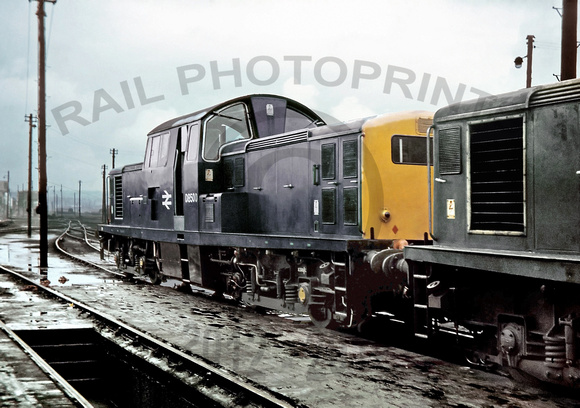 Despite receiving a fresh coat of BR corporate blue paint, the makeover had no bearing on the performance of this precursor of the Clayton Type 1 (later class 17) class. Photographed D8500 at Polmadie MPD (66A) in the company of a green classmate, in August 1967 after what looked to be a rather serious downpour.

Introduced to BR service in September 1962 and allocated to Polmadie (Glasgow) shed, by 1967 it had migrated across the border to Carlisle. The depot staff at Carlisle apparently were not too enamoured with this example, being withdrawn in October 1968, reinstated in May 1969 and finally withdrawn in March 1971. It finally met its fate at BREL Glasgow during November 1971. ©www.railphotoprints.co.uk - Gordon Edgar Collection
©www.railphotoprints.co.uk - Gordon Edgar Collection
Powered by ZENFOLIO User Agreement
Cancel
Continue