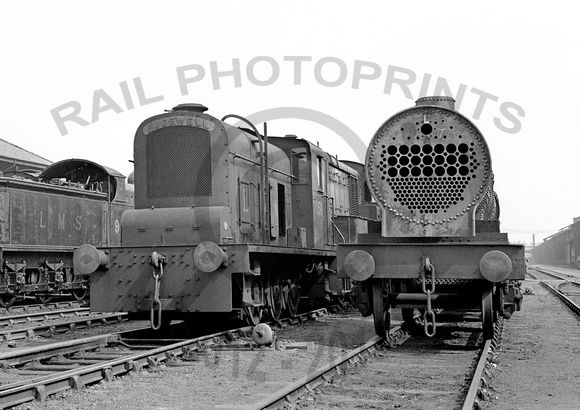 LMS 7056 built by Hudswwell Clark (D581 B1935) must have been one of the shorter lived early diesels, the 150HP
0-6-0DM, it was initially allocated to Leeds Holbeck, then Speke Junction, Liverpool, by 6/5/39 it had found its way to the Crewe Works scrap line, it was then transferred into No 9 shop for conversion to a Mobile Power Unit becoming Mobile Power Unit 1, it worked in Coventry until 1943 when it was moved to Kilmarnock remaining there until 1955 when it was removed only to be scrapped by T. Muir in a yard near Thornton Junction in January 1956. 7/5/39. ©George C. Lander/Rail Photoprints
©George C. Lander/Rail Photoprints
Powered by ZENFOLIO User Agreement
Cancel
Continue